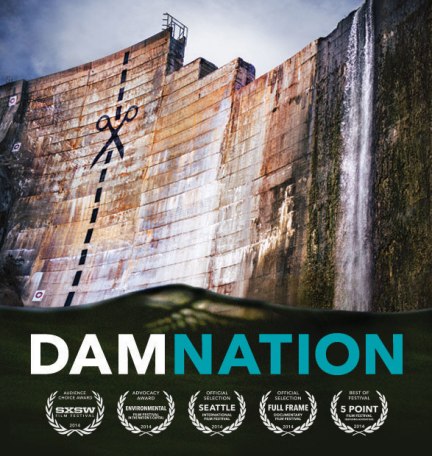 Dam Nation argues that once a source of national pride, dams are  harmful to the ecosystem our future is bound to. Like many viewers, Ben Knight (the co-director and narrator) was “embarrassed” at how little he knew about dams before making the film. Knight’s awakening is shared with the audience in an attempt to educate the viewers about the benefits of dam removal.

The film does not go into too much “depth” in  any of the subject matter. But the overarching message remains the same. It’s argued that while dams may be labeled as “green power” they often come at an unacceptable cost. This cost is the variety, population, and prosperity of native fish. Not to mention, the destruction of natural wonders and the decimation of tribal land. Knight presents his argument through stunning cinematography, convincing facts, and animated graphics. The film stays within the confines of the United States, but with 75,000 dams over three feet tall, there is no shortage of material.

While this film delivers a convincing argument towards dam removal, and may very well be on the right side of history, it falls short in addressing opposing viewpoints. Instead of engaging the opposition and arguing the facts, the filmmakers ignored them and portrayed them as a bunch of old white conservatives. It may have been possible to more cleverly integrate the opposition into the film in a way which supported their own argument.

Secondly, the filmmakers ignored many of the core benefits of dams. Dams can be a great alternative to coal and gas power, despite the potential harm to the fish and submersion of land. Most dams also served a good purpose when they were first built in the early 1900s. The filmmakers did mention that they weren’t advocating for the removal of all dams, but more time should have been spent on where to draw the line.
While many environmental documentaries lower the audience into a dark abyss at the conclusion, this film ends with a myriad of explosions and an optimistic outlook to the future of dam removal. What’s also unusual about this documentary is how it was financed. Patagonia, an outdoor sportswear company, spent $500,000 to produce the film and even more on the marketing campaign. Patagonia says that they are not expecting to make any of this money back.. Patagonia is one of many companies attempting to be environmentally conscious and responsible. This is admirable and can positively shape the perception of the company.

Regardless of some of the critiques, Dam Nation does do a great job of raising attention to the issue and advocating for change. Dams can be harmful to the environment and a discussion should take place regarding the removal of many of them. While the film advocates for change, serious solutions aren’t really given. A phone number is provided at the end of the film, which ultimately sends a link to a petition, but that’s pretty much it. But given that the purpose of this film was the raise the issue, solutions weren’t the major goal.

Dam Nation is on Netflix, so go give it a watch! The trailer can be viewed below: