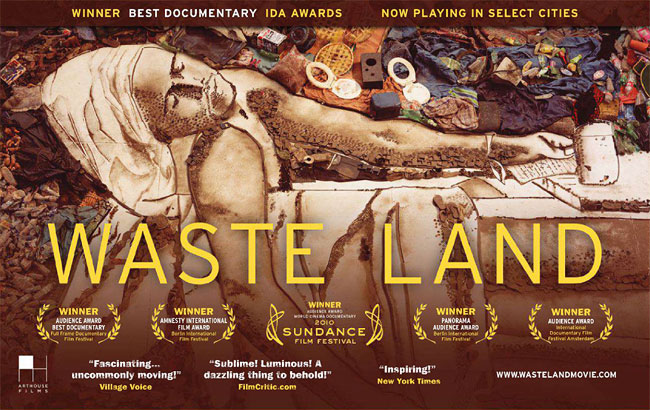 Wasteland, directed by Lucy Walker, is a documentary that was released in 2010. It featured Vik Muniz, an artist that combines photography with everyday objects and materials to create multidimensional art.  The entire documentary focuses on one of Vik Muniz’s projects involving the workers of the largest garbage dump in the world, Jardim Gramacho, which is in his native country of Brazil.  In Brazil, Muniz discovers and learns about the people who pick through the garage to find recyclables.  As the documentary goes on, it shifts from the artwork to each individual as s/he tells his or her own personal story.  Tiaõ, Zumbi, Suelem, Isis, Irma, Valter, and Magna, all let the filmmakers into their homes and hearts. At the beginning of the film Vik Muniz states his mission with the project; he vows to try to help change the catadores’ (garbage pickers) life through art. Together with the filmmakers, along with the production companies Almega Projects and O2 Filmes, Muniz sets out to make this mission a reality.

This film has a chronological structure, starting with the Vik Muniz’ thesis and ending with a conclusion on his mission.  The documentary starts out by introducing Vik Muniz along with his background and previous art projects.  As the documentary progresses it introduces Muniz’s new project idea to use garbage in his upcoming art pieces.  It shows Muniz’s point of view by showing him not only explaining his project to other but also debating about whether his mission to change lives through artwork was actually plausible. By doing this the documentary subliminal encourages the audience to see the world through Muniz’s shoes, in other words, to feel connected to him.  It is a powerful approach because it appeals to the audience’s emotion and gets them invested before the documentary’s main story even starts. The beginning of the film also included Vik Muniz’s first impressions of the catadores, he predicted that most of them would be depressed and drug addicts.  This was important to include because it contrasted with what many of the catadores personal stories.  Most of the catadores had pride in their work because it was honest and didn’t involve drugs or prostitution. Vik Muniz at first generalized them based off their situation and location; however, the documentary proved that the catadores weren’t perfect, they weren’t exactly overjoyed but they weren’t terribly depressed. They were just people, people trying to make a living like everyone else in the world. So the juxtaposition of those two narrations were important because it emphasized the point that at the end of the day people are just trying to survive, and that everyone has a range of personal obstacles and experiences.

Wasteland (2010) has a good mixture of shots.  Although the frames were obviously planned out, the cinematography as a whole was simple, and this allowed the audience to focus entirely on the interviewed catadores. The filmmakers captured the reality and entirety of dumps while complimenting those shots with shots of the homes of the workers.  This style allowed the audience to see the catadores for their entirety; it didn’t just show their work but also their homes, neighborhoods, families and hopes.  As a result of this, the catadores aren’t dehumanized as workers that go unnoticed but instead as whole human beings who are relatable. Unlike Home (2009), directed by Yann Arthus-Bertrand, which portrayed groups of people as nameless masses without a voice, in Wasteland (2010) the people were up close, outspoken and real.  Since the objective of the artist was to change the catadores lives, the fact that he focuses mostly on their stories is effective because it helps others sympathize and want to help as well.  Watching Muniz’s journey, hearing the people’s voices and seeing their faces of joy when the artwork was finished was inspirational.  It is obvious by his reaction that Vik Muniz felt good about helping them and the film makes other want to reach out as well. This documentary portrays helping people as rewarding, which motivates audiences to follow suit.