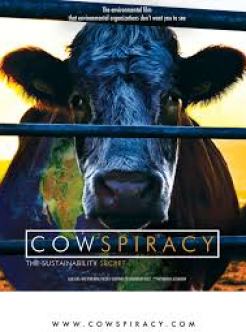 Released in 2014, Cowspiracy: The Sustainability Secret is a documentary that sheds light on the world’s main cause of climate change: livestock farming. The film was written and directed by Keegan Kuhn and Kip Andersen as well as produced by actor Leonardo DiCaprio. The film follows Kip Andersen, an environmentalist who was confused why big groups like Greenpeace and the Sierra Club weren’t talking more about agriculture farming and its effects on the environment. He goes on to explore the climate change that it has caused and found that over half of the world’s pollution comes from livestock farming. The film is largely statistical and many infographics are used to show things like water consumption, meat consumption, etc.

Because the film consisted of many statistics, I found that there was much strength to this approach to filmmaking. Andersen spoke with almost all sides of the environmental problem. In the beginning he tried to speak with the Sierra Club and Greenpeace. He spoke with environmental experts at different universities and those who have done educational studies. He juxtaposed these interviews by spending time at the sustainable farm. In almost all of the interviews the audience was given new information in order to help put together what seemed like one big puzzle.

Regarding the cinematography, there were moments where shots were too overexposed and it became distracting. The amount of rack focuses used was also excessive and I felt that this film was too far away from an art film for it to focus so much on cinematography as it seemed to do at some points. Another small weakness was the focus on Kip Andersen. Although the film is focusing on his journey, I felt that there were many interviews where Kip didn’t need to be seen. I thought the film was particularly strong in its resources for alternative food consumption. The film provided numerous solutions with its outcomes for the audience. In fact, I felt as though unlike some films we’ve watched in the past classes, this film’s purpose was for the audience to make a change. Andersen and his experts provide numerous benefits of eating a meat free diet including reducing your carbon footprint by over fifty percent.

As a vegan of two years and a vegetarian for 8, I have spent a good amount of time educating myself on this particular subject. After watching the film, I felt even more concerned about meat production than I did before (if that’s even possible). There were numerous facts that I had never heard and I sat through the film appalled at most of them. I think the film overall did a good job of relaying this information and giving the audience a solid foundation in which they can make a decision about eating meat. I found it interesting that this film didn’t talk much about the slaughter of animals. I originally thought that was what the film was about. I feel like its difficult to talk about slaughterhouses without talking about what they do to animals, but this documentary stayed on focus with the environment. I think its good they chose to focus on one subject because tackling both issues in one documentary would have been too much. Overall, I found the documentary to be insightful and motivating.