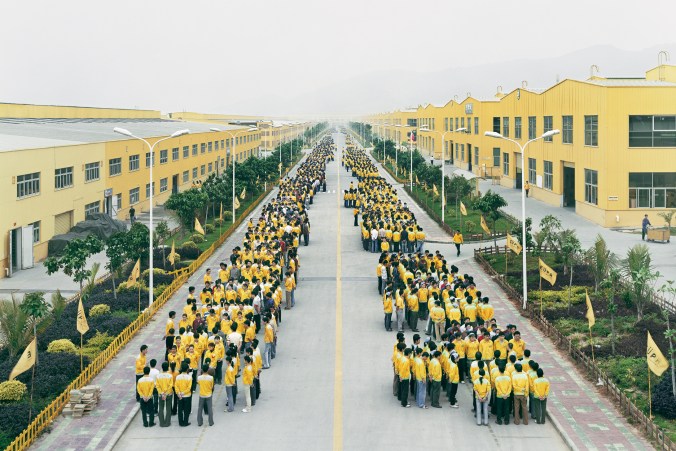 Promotional photograph to be used only in conjunction with the film MANUFACTURED LANDSCAPES, a Zeitgeist Films release.

Personally, I found this film refreshing from most documentaries; the use of a more artistic approach, rather than the more journalistic approach that seems to drown the documentary genre, I felt more engaged with the material of the film as not just a member of the audience but also as a critique of the film and photography, but perhaps this engagement might merely be the result of my background in art history. The artistic approach is also, however, what I believe to be the film’s greatest weakness; I am unsure how accessible the film can be when a base knowledge of fine arts remains necessary for full and proper engagement, and, while the images themselves hold a strong visual impact and the filming retains a certain honesty and candidness, one wonders how the lack of such would alter interpretation. Regardless, the film serves as a strong retrospective on the industrial complex of the world that simplifies, yet not overly, the nature-technology contrast by suggesting, as shown by the title, that we have opted for the replacement of nature with the manufactured world.

I have a strong appreciation for both Edward Burtynsky and Jennifer Baichwal for their artistic prowess. Burtynsky’s use of repetition and the vanishing point work tremendously to, in tandem, deliver powerful imagery that replicates and instills the notion of infinity through the overexposure of the horizon; it’s easy to think of the industrial complex as massive and huge, perhaps even infinite, but to visually capture the idea with real-world material generates a more shocking and disorienting retrospect on the industrial. Baichwal’s cinematography achieves a similar effect; also utilizing repetition, shots such as the nine minute tracking opening control tempo and address our assumptions of the scale we consider the industry. Juxtaposed with the social actors’ interviews which regard things such as the Three Gorges Dam as merely work, Baichwal’s cinematography highlights the sort of pervasive attitude that led us here: a certain numbness and disconnection between our own actions and the environment.

Other than the aesthetical details of the film, I enjoyed the way the documentary was structured. The attitude that Burtynsky takes towards the environment, that it simply encompasses our lives as humanity on earth, becomes accentuated by the structure of film, dissecting the industrial complex into three relationships with nature, humanity, and culture. Even during processes like recycling, the amount of environmental damage is alarming, such as the tainting of water by the toxins released through the heating of recycled motherboards. The effects on humanity, and not simply the fact that immense water supplies have become, to a certain degree, unusable resulting in the importation of bottled water, but also jobs that endanger the lives of others: the workers at the shipwrecking yards was the most alarming moment of the whole film to me. That the life expectancy of the worker rarely exceeded thirty proved reminiscent of slave statistics in Brazil during Portuguese occupancy. Lastly, cultural endangerment was an aspect of this issue I haven’t even considered; in fact, it appears odd to me that we would throw away the past in search of progress. I think the last section forces us to consider what life would be without culture, and would that even be a life that we would want; more often than not, I think we would conclude no.